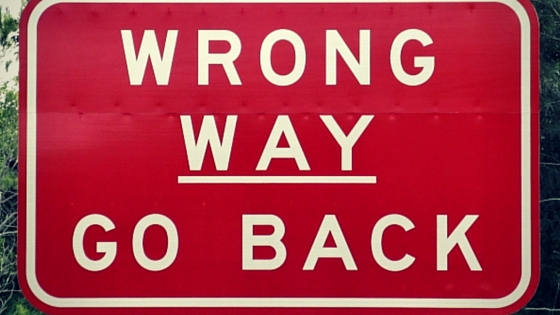 Ever since any of us were born, we have been told one simple rule: be right. If you’re right then good things would happen to you. You’ll get a gold star. You’ll get an A on your test. People will call you smart and pat you on the back. If you’re wrong, then things won’t be so great. You get marked down. Your parents will be disappointed. You get labelled a failure.

Now of course, being right is good. You wouldn’t want a doctor that makes wrong decisions, right? You wouldn’t a lawyer to tell you the wrong things, or an engineer to make the wrong calculations. Society depends on people being right.

Some time ago society realised this, and decided the best way to make sure that people get things right is to stigmatise being wrong. If you’re wrong, you are stamped a failure, no refunds. It’s reached a point where “I am wrong” has become a bad word that people won’t even say in traffic, unlike other bad words.

This ‘I’m never wrong’ mentality rears its ugly head in many ways. I was once unfortunate to be involved in a group discussion about the housing market in Malaysia. I can’t bore you with the details because I can’t remember them, but I remember this one guy who just didn’t know when to call it quits. He was totally smug about himself, convinced he had all the right answers despite everyone telling him that he was wrong, with sources as proof. He ended the discussion by saying, “Honestly you all are just wrong. I’ve done a lot more reading that you have so just believe me.”  I think that convinced all of us that arguing with him made us feel like a crazy old guy shouting at the tide to change.

In another way, because we hate being told that we’re wrong so much, we seek out people that would validate our beliefs and avoid everyone else. Politics is the perfect example of this. I used to love browsing Reddit because you get a large variety of content mixed in with interesting discussions and insights. But lately, with the US Presidential Elections dominating the headlines, it’s becoming a nastier and nastier place. Supporters of Bernie Sanders will defend their idol to early hours of the morning. They will call anybody who supports Hillary Clinton either misinformed, paid to say nice things about her, or just plain dumb. Any news that is negative about the Sanders campaign is either ignored or declared as biased and part of a conspiracy to bring him down. These Sanders supporters have r/sandersforpresident as their headquarters. It’s a place where people can go to have their beliefs about a conspiracy against them reaffirmed. To have other opinions shut out. To be told – yea you were right!

Any meaningful discussion about any interesting topic requires something amazing to happen – two sides with different opinions need to sit down and have a meaningful talk without name calling or chair throwing. Both sides have to be listen to the other viewpoint and be open to have their minds changed. How did this ever happen, in the history of humanity ever? Maybe that’s why there were so many wars. People rather killed someone else than say, “Yea, probably was wrong about that.”

It wouldn’t kill us to admit that we’re wrong once in awhile. Yes it is a horrible feeling. For one, you have to change how you fundamentally viewed something, because before you always taught you were right. Second, people are going to see that you’ve made a mistake. How are they going to view you now? Would they trust you with anything anymore? Would you be banned from walking in public without a sign saying ‘loser incoming’?

Being wrong isn’t as bad as you think it is. Sometimes it’s even the best way to learn. Whenever a consultant asks me a medical question I never really remember all the times they said you’re right. I only remember the times they said “not quite,” “try again,” or even “you couldn’t be more wrong.” Like someone said, being really bad at something is the first step to becoming kinda good at it.

And next time you’re old you’re wrong, hear the other person out. The other person could just be an asshat and don’t know what their talking about, in which case go ahead and unleash your fury upon them. But once in awhile someone will tell you something, either it’s an opinion or a new fact, that will change your mind. In which case open yourself up for discussion with your new bestie. See, that’s progress! And not a single war waged.